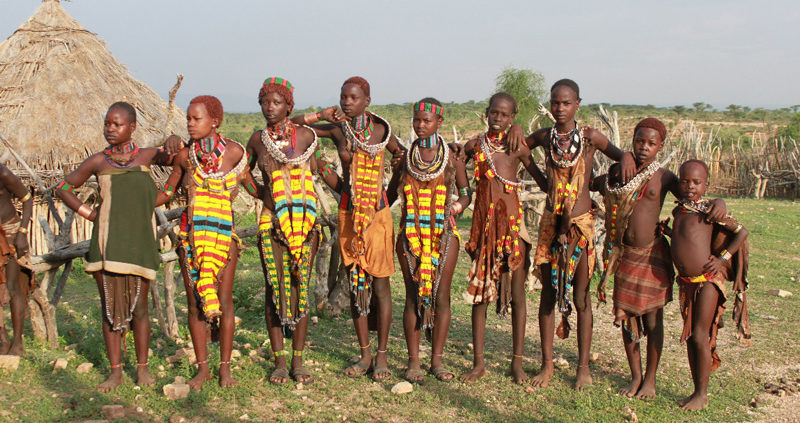 Image, fashion, how we see ourselves and how they see us. And why it is important
My travel to Ethiopia made me reflect on the meaning of the image in society, and social and personal evolution that represents the way in which we present ourselves to the world. Some still think of fashion as something frivolous, when anthropologically has demonstrated that it is a way of expression , when a sample of culture, art, or history.

But I had never seen a confluence so substantial of identities and cultures together, as in Ethiopia, where the image implies much more than what at first glance appears to be, and where the own appearance always has a meaning beyond the simple vanity.

In a country where live around fifty tribes and different ethnicities, different rites, different ways of life and beliefs, and dare I say, they are in different States of evolution, there is nothing like visiting a traditional market to observe the degree of aesthetics and visual richness and differentiation among the ornaments of different tribes. And that while the Western world is entering with force even in this redoubt of Africa and increasingly are seen more Africans who leave their culture to dress like Westerners.

And yet, in different tribes,we can see that the aesthetic sense and image pervades all their culture from the beginning, and each detail has its importance and can not be ignored.

1. Your image is you

The Hammer and the importance of every detail.

The tribes of the area recognize each other by their image and way of dressing. One can identify with absolute certainty which tribe they belong by the embellishments they wear. And anyone outside of the tribe would wear them. Even if there is a wedding between tribes ( the woman joins the tribe of the man ) they continue using the ornaments of the tribe they were born. Because they are who they are. The wedding does not make them someone different. And its image is unchanged.

The ornaments speak of their social status, whether they are married or not, of their life, and how the others see them. They are a symbol of union and differentiation at the same time. 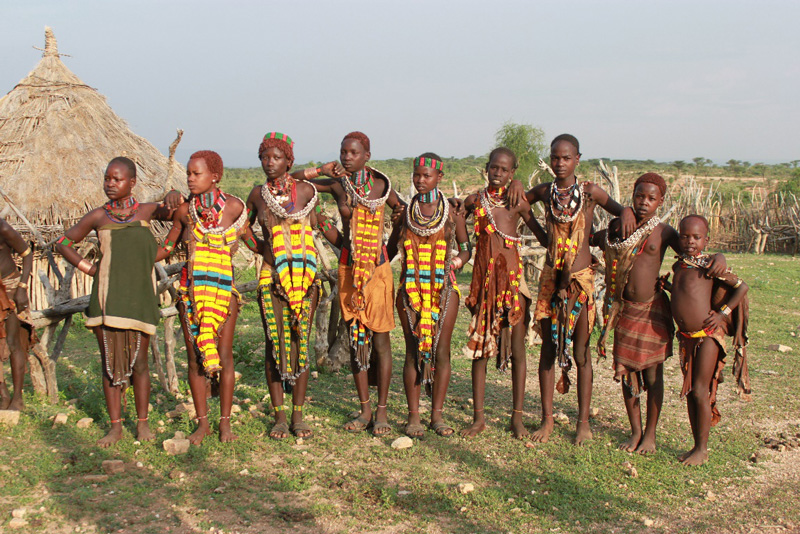 The tribe Hammer marriageable young girls always show their finery. The beads are a symbol of wealth and status. 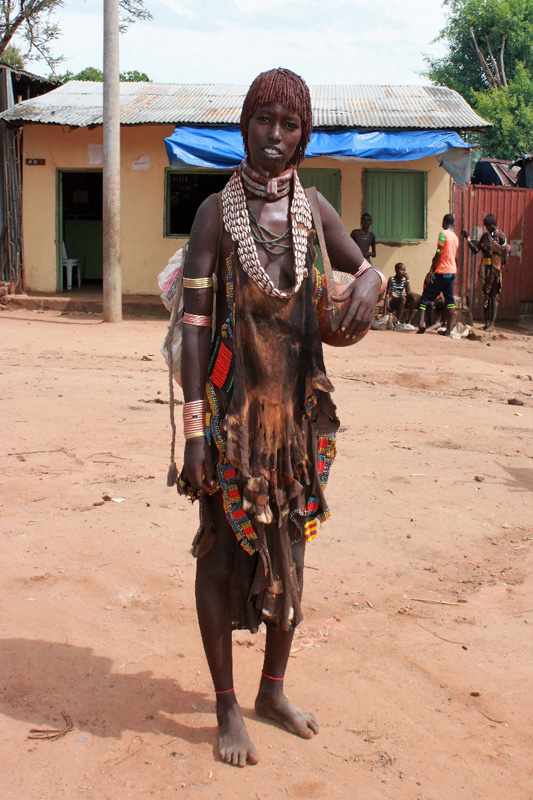 This young Hammer woman carries three necklaces on neck, as many as couples she had . The necklaces show she’s a strong woman and appreciated by men. The necklace with bulge indicates that she is married again. The wide collar of shells indicates membership in the tribe. The colored beads and leather she wears indicate their social status. She is a wealthy woman.

2. Your culture is part of you

The Dorze and their Leopardskin

The Dorze, live in the mountains near Arba Minch. Despite living isolated in a mountain, They are one of the tribes who are more in contact with Western culture. There is an important community Dorze in Addis Ababa and it is not unusual for Dorze youngsters to go to University. They also make fabrics that sell successfully, furniture, craft, and are known for their musical richness. Their life expectancy is much higher than the national average, its economy and laws of coexistence very similar to the Western.

And by tradition, however, they are still killing leopards.

In Ethiopia there is a penalty of 30 years in prison for hunting a wild animal, and the Dorze know it. But for them, the Leopard-skin is not simply a rite of passage to adulthood. The teenager must hunt one to prove that he is a man, and being one of the fastest cats on the planet, is no easy task. But the important thing is that he must keep this leopard-skin all his life and he should be buried with her.

It will be used like motif on special days, if he wants to get married and have a family should have one. And is a sign of respect to wear it during funerals, moreover, do not wear it can be considered an insult. Traditions around the Leopard-skin, are so impregnated in their culture the Dorze are still running the hunt despite the prohibitions. 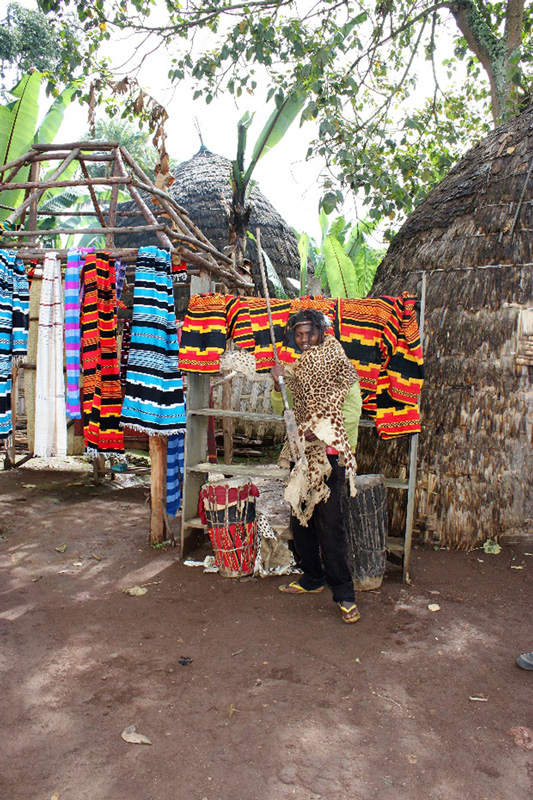 However, the Dorze are perhaps those who use more Western attire. Dorze women wear clothing rich in colors and designs. Dorze men wear Western trousers and shirt regularly. The Dorze are aware of its image, and like the rest of the Ethiopian tribes, if they know that they will receive visit their finery are put. Most tribes are slowly acquiring the habit of dressing. It is expected that in a few years some of these forms of traditional dress will go away. Even the most remote tribes are beginning to wear Western garments. 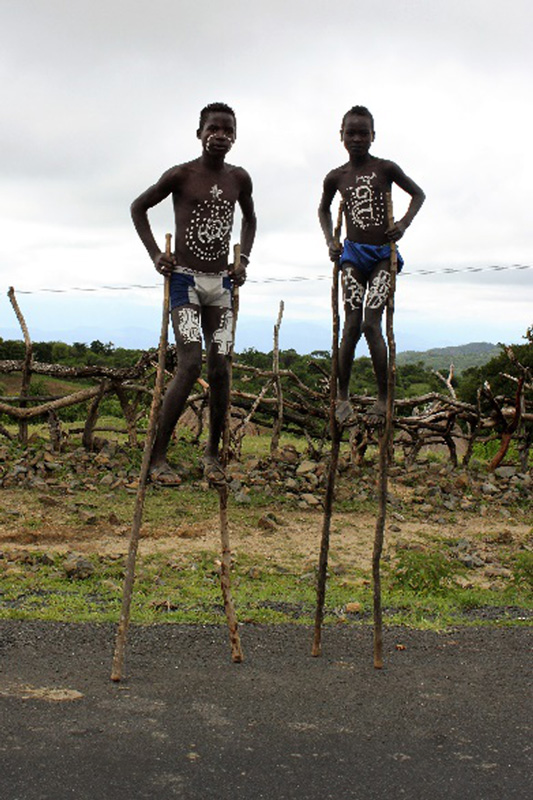 Youth of the tribe Arbore going to the market, with his paintings and stilts, and boxers instead of the traditional matching of fabric previously used. It starts to be frequent to see Western clothing in the days of market.

It really grabs attention the value they give to these garments. It made me think seeing some young Hammer that traveled with the shoes hanging from the neck, and put them upon reaching the market. If we take into account that some tribes travel forty and fifty kilometers on foot to reach the market, barefoot, it goes without saying that the shoes are considered an object of luxury, and are used as a sign of vanity.

4. Your image affects others

The Mursi and the importance of the image

However the tribe that most impressed me, and not only because of its enormous visual richness, was undoubtedly the Mursi tribe.

It is one of the most prehistoric tribes that exist and one of the most difficult to visit. Firstly because they are nomadic and do not build more than small sheds to the ground to spend the night, so there are no settlements, and not even the Government has been able to register them. And secondly because they are considered a dangerous tribe. They live on the border of Ethiopia with Kenya and Sudan and they carry weapons, kalashnikov, that they get trading with ivory and animals. They are hunters and do not attend any of the laws that are more or less known by the rest of the tribes of the Omo River. They move through their area and are uncontrollable. The inhabitants of the area know that it is better to not meet them alone, and the tourists face real danger unless they are accompanied and protected.

You can visit upon payment to the Chief of the tribe, after reporting to the guards of the zones they move, who notify and deliver the money to the tribe. The visits are made in groups of four or six people, and accompanied by armed Ethiopian soldiers. Visit them without notice, it would be considered an act of aggression. They don’t like tourists, although in recent years they have learned that turist are another source of income and tolerate them.

The visit is quick and with minimal interaction. And the photos are paid. They know very well cameras. However they do not know as well tablets, which got me some snapshots that show really as it is the life of the Mursi.

The men wear a tunic of traditional fabric, very similar to that used by the Masai. They carve their body making cuts that when heal remain as intricate tattoos. They always carry spear or kalashnikov. They are warriors and show it in their aggressive poses.

Women also wear the traditional fabric. Since very young they pierce the lip that decorate it with a plate. These plates are made with clay and milk breast-feeding that they make and decorate themselves. Some say that it was a prevention. They maul the women so that they were not attractive to the slave traders. There are many theories on the subject, but in reality the origin of this aesthetic tradition is unknown. 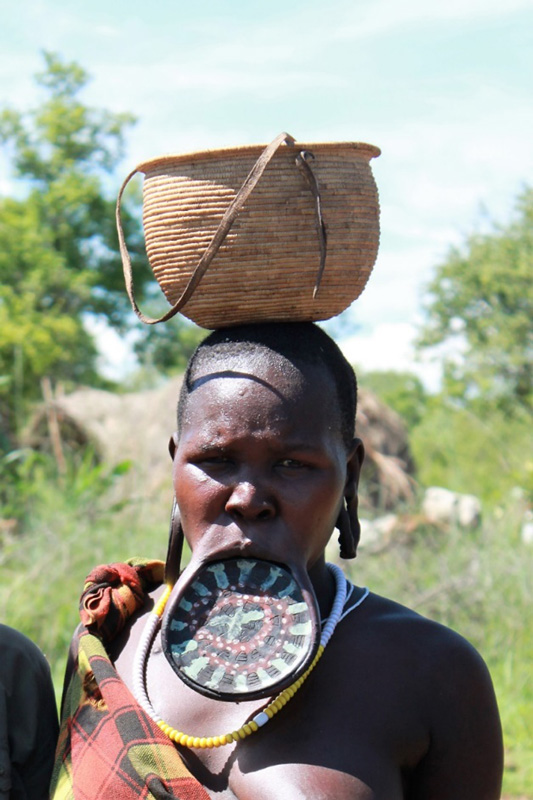 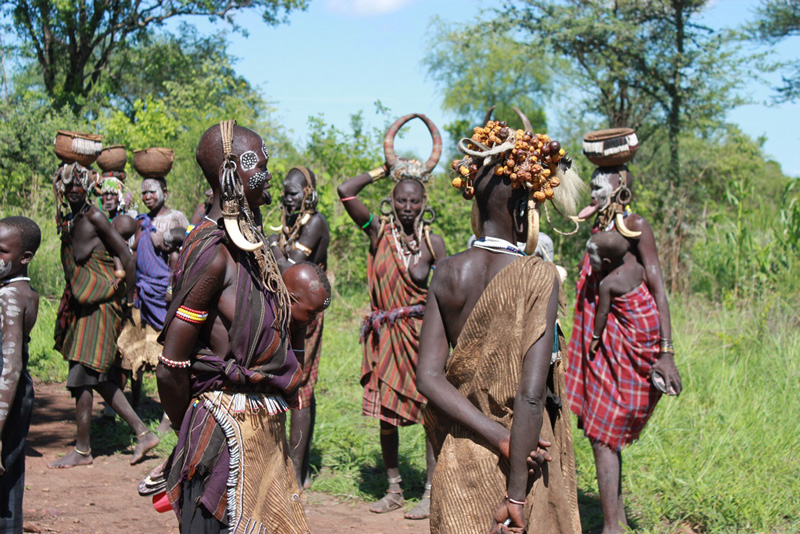 Mursi Women caugh unaware. Only one wear the lip plate, you can see the hanging lips from the others. It is impressive its right position and its elegant pose. This picture was taken without them knowing it.

With the exception of the tradition of the lip plate, and unlike other tribes the dress dress does not identify them. In fact the Mursi are much more ancient than the rest and live in an absolutely wild state without more material possessions tan what they have in their baskets, and however, they give much importance to the image.

According to the Professor Karen J. Pine, http://www.karenpine.com  a psychologist and researcher specialized in fashion, the Mursi dress to get one reaction in others. In a society without mirrors, they use of all branches, dried flowers, stones, seeds, horns, feathers… all with the sole purpose of differentiating itself, of being seen. In a society of proud warriors one cannot be timid. In a society where one does not see itself, the reaction of the others gives them clues about their own image.

Style, character, personality, all part of your identity.

However, despite the differences, there is something that all the tribes I visited have in common, and is having a strong sense of aesthetics. Beyond the symbolism of the own tribe, the self-image is important. Women and men paint each other, and paint the children. Girls decorate each other and their laughter and flirtation are comparable to the Western youth. Manufacturing of embellishments and the clothes is important and takes his time. They know who they are and what role in the tribe they have. Scarring, lack of teeth, or of a part of the body… does not affect its image at all.

These tribes are an authentiuc anthropological treasure with expiration date. Their way of life and dress is being invaded by Western culture, the pride of belonging that carry their ornaments will be cleared of the history by means of Western shirts, and this part of their culture will be lost. One can only hope that with his image, they don’t lose also their sense of identity, because these people move safely in the perception of its image, something not always found in Western culture.

If they have a chance to see their reflection in a mirror or in the window of a car, they celebrate it and take pride. They flaunt without arrogance and with ease, and pose with an enviable naturalness. As Coco Chanel, said “beauty begins the moment you decide to be yourself”. I have to say that I have not seen on any catwalk, grace, style, and confidence as demonstrated by the people of the tribes of the Omo River, including the wild Mursi.